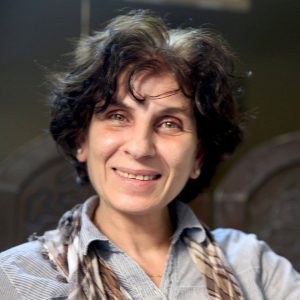 As a Syrian political dissident, Samira Al-Khalil tirelessly defended human rights and justice. As a young woman, she was arrested for belonging to the Communist Action Party and her opposition to the regime of Hafez Al-Assad. She was tortured, then detained from 1987 to 1991. During her detention, Samira distinguished herself by her attentive presence, her acts of support, her humor, her way of taking care of her comrades in detention, her unfailing resistance.

A few years after her release, Samira met her future husband, Yassin al-Haj Saleh, a Syrian writer and intellectual who himself spent sixteen years in the regime’s jails. It was together that they committed to the Revolution from its first moments in March 2011—and it was together that they fought for democracy and justice with the Syrian people; thoroughly aware of the risks they were taking—yet borne by the powerful hope of the uprising.

In the Spring of 2013, when their situation in Damascus became untenable, they left one after another for the recently-liberated town of Douma. Yassin then went on to Raqqa, his birthplace. Samira remained in Douma, surrounded by her activist comrades and the town’s population, whom she grew to know.

The women and children of Douma came to speak with her and confide in her—and she committed herself to them, while the siege closed in around the town that was bombed daily, and while the Islamists gradually took over power in the area. Her resistance was flawless and enduring. She works to support women and children, committed for democratic and civic practices to be developed, documented crimes, worked for a new, free Syria against a regime that every day did its utmost to crush their efforts through total violence.

She told the story of this obstinate determination, and this resistance, in the diary that she kept, in which—despite the deprivation, the suffering and the terror—she never forgets to spare a thought for those suffering elsewhere. Throughout the pages of her diary, she also condemns the “world’s conscience”, that has turned its gaze away from Syria’s tragedy, and refuses to live up to its share of responsibility.

The struggle that she led with her comrades to document these crimes and to build a free Syria unnerved the regime, of course. But it also unnerved the Islamists. In the night of December 9 th -10 th 2013, Samira al-Khalil, Razan Zaitouneh, Wael Hamada and Nazim Hammadi were kidnapped, very likely by the Islamist group Jaysh Al-Islam, that had taken control of Douma. These four icons of the Revolution became the “Douma Four”. There remains no news of them.

A few years after Samira disappeared, Yassin retrieved her diary and published it. It has since been published in Arabic, Spanish, and Italian. The French translation will be published by éditions iXe on February 2nd, 2022, Samira’s birthday.

We, Samira’s friends, family, and supporters, have chosen this date of her birthday to announce the foundation of the Samira al-Khalil association. Because history and Samira’s long absence make her life inseparable from Syria’s destiny. Because Samira’s love, her sense of dignity, and her care, provide strength. Because Samira embodies a struggle for ideals of liberty and justice, that is everywhere under threat; because she embodies a humble and powerful ethic.

At the end of her diary, Samira wrote the following: “Vandalizing the soul of those who remains alive: this is the goal of this regime of comprehensive destruction.” In the end, Samira resisted this project of destruction. It is the imprint and the inspiring force of this spirit of resistance that our association has a duty to nurture and to keep alive, by making Samira’s history and struggles known—but also by supporting women who resist throughout the Arab and Mediterranean regions. The Samira al-Khalil Prize will be awarded to one of them each year.